“Safety and security in our homes, neighborhoods and communities is an issue that must be a priority for all elected officials and it certainly is for me.  I have consistently advocated for additional public safety resources as well as funding and legislation that is important to the women and men that keep our families safe.  Throughout my life, I have been a supporter of law enforcement personnel that risk their lives to serve and protect our communities. I believe strongly in community policing and believe that our neighborhoods are best served when we foster a respectful, positive relationship between citizens and first responders.  As a Senator, I have built relationships with members of law enforcement and have listened to their concerns and have advocated for their priorities, including key provisions of the safe communities act that were supported by police chiefs throughout the Commonwealth. I am proud to have played a role in securing a dedicated funding stream for police training after hearing the frustrations of Chiefs from throughout our region.” 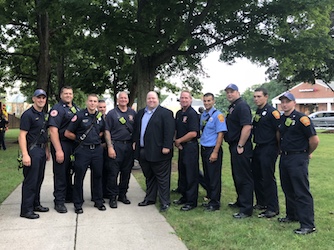 Senator Feeney, in his campaign for State Senate in 2017 was proud to be supported by the Massachusetts Coalition of Police, the Professional Firefighters of Massachusetts, SEIU-NAGE, Massachusetts Correction Officers Federated Union, and others.  Paul’s allegiance to those that protect our communities and keep law & order goes back decades and has guided his actions in the State Senate. From his leadership as the Chairman of the Joint Committee on Public Service, to the many amendments he has sponsored and co-sponsored, Senator Feeney has shown an unwavering commitment to public safety and first responders.

Paul supported and fought for a dedicated funding stream for police training and upgraded training facilities this Spring and credits the advocacy of Police Chiefs in the Bristol & Norfolk district for their advocacy.  This Summer, Senator Feeney was named as Co-Chair of the special commission to examine the hiring, promotion and recruitment policies of the Massachusetts State Police.  Feeney will be working in the coming months to gather data and meet with stakeholders as the commission prepares their report and recommends changes.