“Politics as usual is no longer acceptable.  I believe that our legislators must embrace a spirit of open and responsive government.  We should be held to a higher standard when it comes to transparency and must do everything we can to shed light on the legislative process.  Public service should never be about the elected official’s ambition and must always be about service to the people we represent. I owe it to the people of our district to be open and honest, to be available and accessible. Those values serve as my compass every day as your State Senator.  I post frequently on social media to let people know what I am up to, and legislation that we are debating and voting on. I have held dozens of district office hours, open to all constituents, to allow for personal discussions of State and local issues and I continue to meet with local officials and advocates throughout the district to listen to their concerns.  This is a full-time job that is best performed by a Senator that listens, that is invested in the community and it’s people, that is available, that is honest and that is passionate about the job. I hope you see that in me as I am guided each and every day by those principles of public service.” 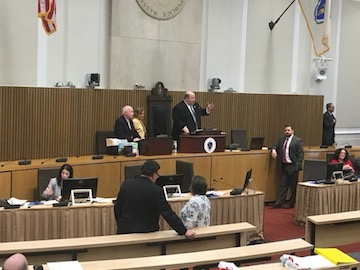 Shortly after Senator Feeney took the oath of office in late 2017, he was asked by the President of the Senate to serve on a special legislative commission that is studying the legislative exemption of the state’s “public records law”.  Working with his colleagues, Paul has been receiving testimony from media outlets and other advocates regarding this exemption. A “good government” advocate, Senator Feeney believes that the public has a right to know when it comes to legislative matters.  Paul and his staff hold office hours regularly in every community in the Bristol & Norfolk district and he meets often in senior centers, libraries and town halls with constituents to provide updates from the Senate and sometimes to just talk sports and other hot topics.

Senator Feeney, in his first speech to the Senate, exclaimed that he would “never let politics get in the way of progress”.  Nowhere is that more evident than the cities and towns of the district. Paul has built positive relationships with Representatives of both parties to effectively deliver for our communities.